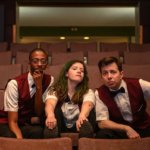 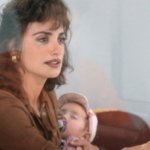 Adam Sandler is a Crackhead

Let me explain.  In the Safdie Brothers’ new film, Uncut Gems, Adam Sandler is an extremely neurotic, narcissistic, selfish-to-a-point-of-comedic-tragedy type of human being that we have seen before on film, but, perhaps, not to this degree.  Not believably anyway.  On paper, there is no way that this character could be regarded as anything but cartoonish buffoonery.  Based on this fact, this film should fall flat on it’s face, much like most of Sandler’s Netflix exclusive films.

However, there is a reason why Mr. Netflix gets paid the money he does.  He may not show it every time out, but he, the Safdie brothers (Benny & Josh) and, of course his old pal, Netflix, know what he is truly capable of.  He showed us a few times before — Punch-Drunk Love (2002), Reign Over Me (2007), and The Meyerowitz Stories (2017) — that he can do…. things.  However, due to all of the other sub-par projects he released between and after these dramatic pivots (The Week Of, Sandy Wexler, The Do-Over), it’s easy to forget how deep he can get into a character.

Uncut Gems was produced not by the streaming service, but by rising production house A24 (Waves, The Lighthouse, The Farewell — all generating significant Oscar buzz this year).  It is a two-hour anxiety attack in celluloid form about an over-ambitious New York City jeweller who is always looking for the next big score.  He makes a series of incredibly high-stakes bets that could eventually lead to the windfall of a lifetime.  Throughout the movie, in every single scene, he is performing a high-wire act, balancing his family life, his mistress, his business, and nefarious adversaries that he has created for himself on multiple sides, all without a net, all in the name of his relentless pursuit to beat the house.

We came into this movie not knowing what to expect.  We left with the shakes.  Legitimately.  Here is the thing though:  This is a dialogue/performance driven piece; not a lot of violence or actual precariousness.  The real tension is masterfully built by Sandler’s character’s constant neuroticism and decisions within that natural state of being that has the audience on constant edge.

Sandler is actually portraying a very smart, previously successful individual.  This is what separates this film from other gambling addiction films like Mississippi Grind where these people with this illness have the notion of risking it all because they believe they have nothing.  Sandler’s Howard Ratner is a well-established jeweller with some high-end clientele.  He doesn’t need this money, or this win.  He just wants it.  Bad.  This is not a stretch.  This is America.  There are several millionaires who have the same drive.  That’s why there are billionaires.

Kevin Garnett plays himself during their 2012 run at the NBA Finals, when the movie takes place.  Although this is not a true story, the Safdie Brother’s choice to add a real NBA star to the story to play a hypothetical, yet believable version of himself during an actual documented playoff series, was nothing short of brilliant for so many reasons.  First, it legitimizes the stakes involved in the chances that Ratner was taking; and secondly, in order to play out the drama of sports betting, re-dramatizations of those games were not necessary as they could simply purchase the actual footage from the NBA and intersperse it throughout the movie at a fraction of the reproduction cost.  I’d be surprised if KG ever touched a basketball during the filming of this movie.

The Safdies utilized this tactic, not once, but twice, by enlisting The Weeknd to play a 2012 version of himself who, understandably, becomes Sandler’s main concern when it comes to his young mistress (played by Julia Fox) wanting to be out in the club partying too much.  She gets a link to party with The Weeknd, who, at that time, was only singing songs about getting your girl high and banging her.  True story.  Since then, arguably, he has broadened his repertoire. 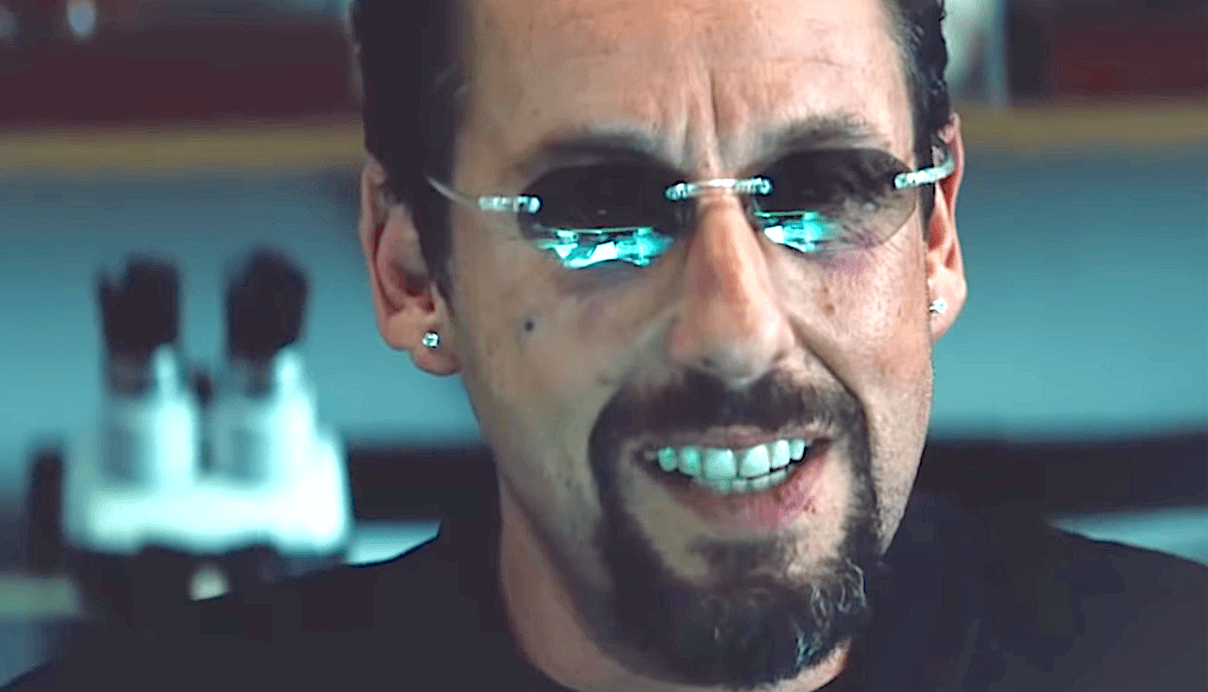 This tool succeeds in legitimizing a personality like Ratner’s having a place in an America that we, as an audience, actually recognize as a very familiar one.  Brilliant move.

More astonishing than the tools used by the Safdie’s to legitimize the world that this could occur in, is the teamwork and trust between themselves, the amazing cast that includes Lakeith Stanfield, Idina Menzel, an amazing debut from the gorgeous and talented Julia Fox, and, of course, Sandler, himself.  Together they have created this insane embodiment of a triple shot of expresso and 17 cans of Jolt cola in their depiction of Howard Ratner’s world.  There are few moments of quiet in this film.  In almost every scene, Sandler is constantly talking and moving erratically, whether someone is there in the scene with him or not.  He is an incredibly smart man, who you get to look inside and see a world of insane chaos.  At the beginning of the movie, this behaviour just seems quirky.  As you meet his co-workers, friends, family, and mistress, you start to see that it is much more than that.  It is something that in a big city like NYC, may have aided him in succeeding at his dream of being a coveted jeweller, but if left unchecked, becomes a monster, an achilles heal, a personality trait that could possibly end up devouring him, if he gets too close to the edges that he seems to get some sort of a high from dancing around.

You are literally on the edge of their seat as you see this man seemingly cunningly navigate through various things that seem to and should matter to him.  Figuring out what those things truly are becomes the mystery of the film.  This is a movie that is not for the faint of heart for all of these reasons.  It is a modern horror film as there are no conventional monsters.  The monsters in Uncut Gems are borne from the darkness that is an ungodly combination of the Pursuit of Happiness, greed, and over-indulgence.  Every step in the dark is disguised as a minute-to-minute decision made by Sandler’s Ratner.  There really hasn’t been a movie, in my opinion, that involves relatable human neuroticism in a way that it almost becomes a character in the movie, itself, to this degree.

It makes you nervous… for two hours.  Without explosions, or CG, or superheroes, or coffee.  Just with… decisions.  That’s it.  People go to movies to feel things.  Anxiety is a thing.  But you get to leave it in the theatre when the credits roll.  This is a must see.  A lot of people at this screening agreed.  That’s probably why it has a wide theatre release date of Christmas Day.  Also why there is early Oscar buzz for Adam Sandler for this roll.  I’m sure Howard Ratner would be willing to bet on Sandler getting a statue for this one.  If, he wins, he deserves it, and we may see more of this depth from Sandler in the future.  If he loses, it is almost guaranteed that he doles out another 12 years of Adam Sandler and his friends lowering the bar at the House that Sandler built (Netflix).  Academy, the future is in your hands.

“The Flick” opens at Crow’s Theatre on Carlaw St.