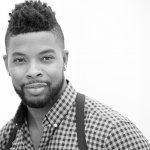 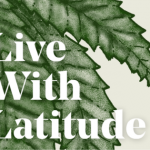 MobToronto was, once again, invited to SiriusXM’s Top Comic Finale at the Winter Garden Theatre during JFL42.  It was set to be an amazing laugh-filled night as the final 10 comics go head to head for the title prize — $25000, as well as a guaranteed spot at four of the world’s biggest comedy festivals in 2018: JFL Sydney 2018, a solo show at JFL42 and JFL NorthWest 2019, and a spot at Just For Laughs Montreal 2019, including a feature in a Bell property TV taping.  For young, up-and-coming Canadian stand-up Comedians, this is the much-needed big break they have all been looking for.

We got there early and got to speak with some of the comics.  Right away, Chanty Marostica and Kyle Brownrigg politely made themselves known to us.  We discussed the awkwardness of them having to meet and mingle with the media right before they have to go on stage and compete for their future.  Marostica seemed surprisingly laid back, Brownrigg, equally chill.  They kinda left it up to fate. 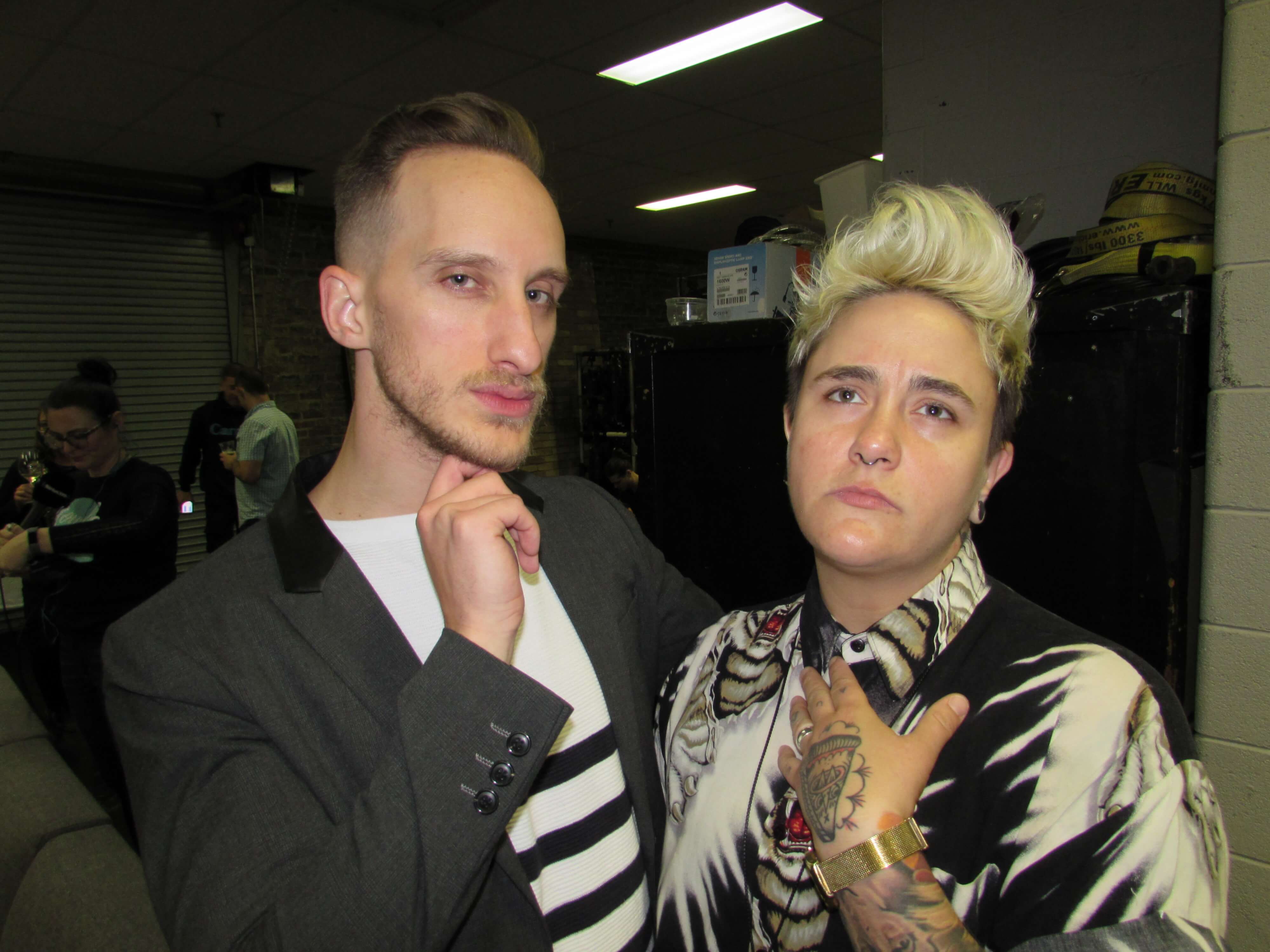 Kyle Brownrigg & Chanty Marostica getting their game faces on.

“Being here, in itself, is an achievement.  We’ve been around the circuit, we know most of the people we are competing with.  All of these comics, to be able to get this far are great talents.  I count myself lucky just to be in the room.”

Brownrigg let us know that if he won, he would be the first gay man to win.  Marostica, a prominent member of Toronto’s LGBTQ community, who apparently came out to their parents days before their JFL42 run at glory, informed us, that if they won, they would not only be the first of their pre-assigned gender to win the Top Comic Crown, but the first trans man to win. When we asked Chanty what they would do if they won, they stated that they would complete their gender re-assignment and become the man they always knew they were, and that their winning would be a big step in the trans community in terms of acceptance.  They both felt that in the stand-up comedy world there is still not adequate representation of their community, and they wanted to do their part to bring awareness.  With this added pressure, though, the two seemed as cool as two LGTBQ cucumbers, and they were a delight to meet and talk to.  We told them we hoped they’d win. 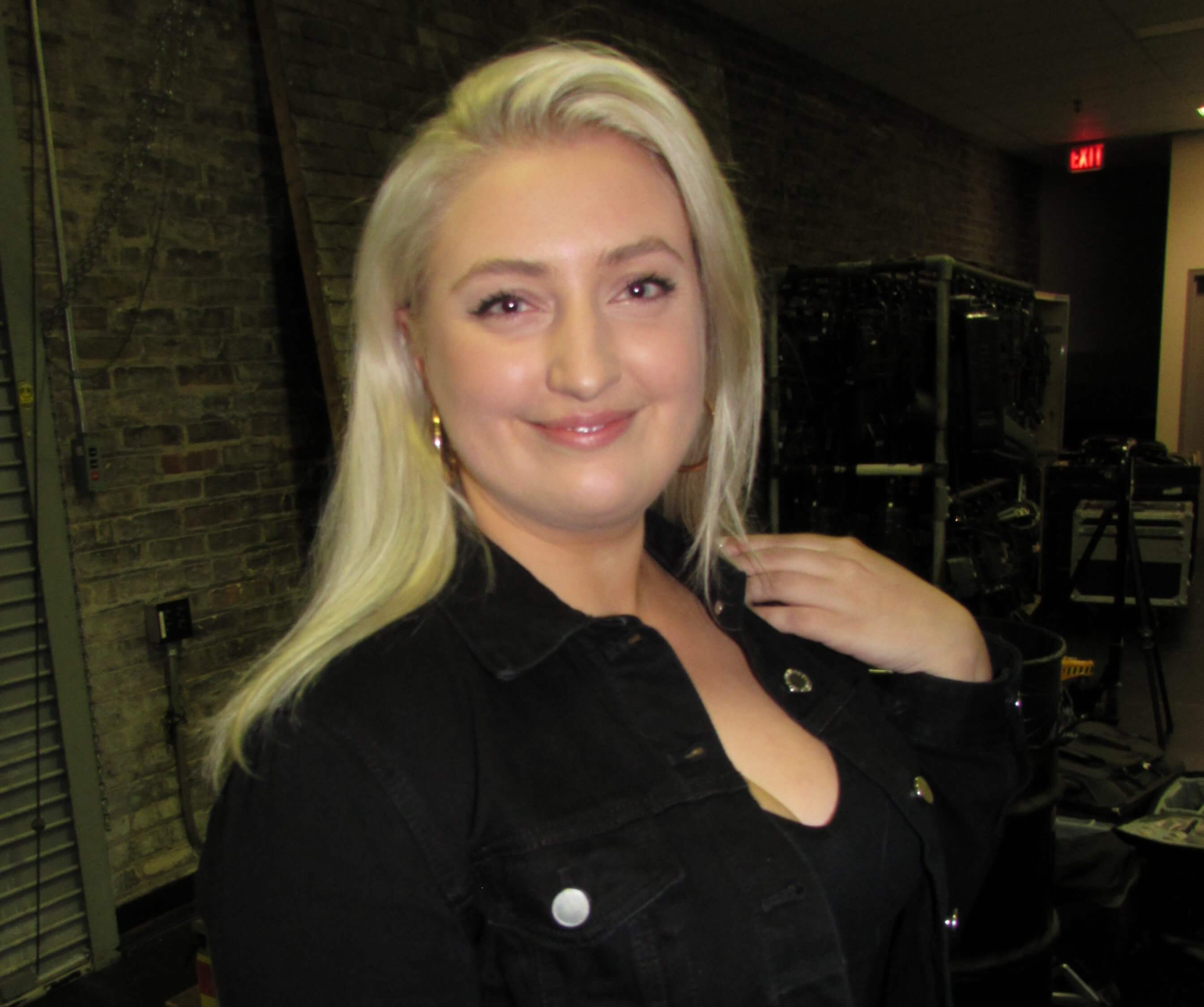 Sophie Buddle, taking on all funny people for the win.

Then, as it was getting closer to showtime, we got to have a quick chat with young, comedic stunner, Sophie Buddle.  She let us know that she was from out west (Vancouver), she is currently a correspondent on This Hour Has 22 Minutes which she shoot partly in Halifax, and that this was her second stab at Top Comic.  She really wants to win because she was the runner-up in 2017.  She has an innocent, unassuming way of being, this one.  That is her weapon.  She uses that personality to unleash a string of words and scenarios that you wouldn’t expect coming from a pretty demure young woman.  She compared her style to Ellen Degeneres, in the way that she tells her jokes in a conversational, matter-of-fact way, that flirts with the outrageous.  We got a little taste in person in the pre-interview, we would see more of that on-stage.  When we asked her what she would do with the winnings, she said she would use some of it to get her VISA so she can work across the border and take her career to the next level. 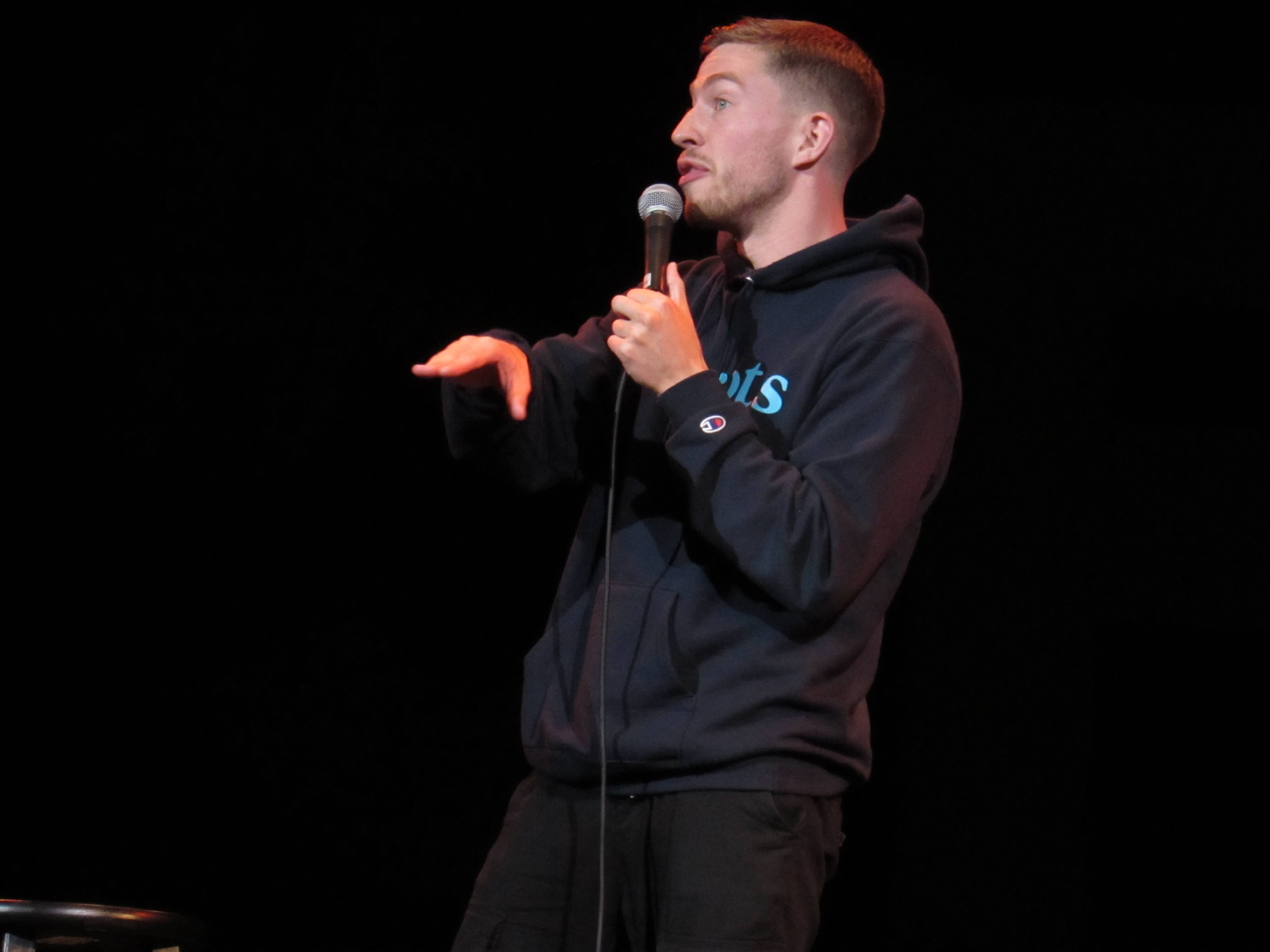 We said our goodbyes, and it was showtime.  The show was opened by last year’s Top Comic, Vancouver’s, Gavin Matts.  Within seconds of him hitting the stage, you can see why he took the crown.  Out of the 10 finalists, we favoured only a few, who had perfect delivery and style, and had us rolling.  Notably and in no particular order: 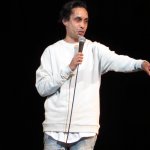 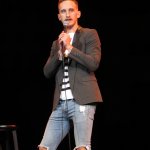 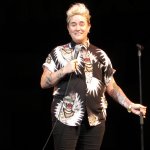 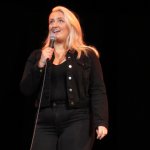 Nick Reynoldson was the first contender.  He stepped to the stage and totally destroyed it with the most creative self-deprecating humour that we’ve heard on this side of the year 2000.  Comedians in the same vein, like Hannibal Burress, Jim Gaffigan, and John Mulaney, could take notes from this guy.  To be fair though, he has a lot more to work with than those guys (his words).  Early on, he was the clear leader.

Then we were impressed by Brownrigg’s storytelling as great lead-ups to his well-thought out punchlines.  To be fair, though, most, if not, all of his subject matter was about being gay.  This act may have killed 10-15 years ago (in terms of shock value), but here, even though it was enjoyable, it wasn’t enough to make us forget about Reynoldson.

On the flipside, Marostica’s set started out about being trans, but then really went into what it was like to be a human in a world with the rest of us.  They do a great bit on uber females and has a knack for doing impressions of them, similar to show-closer and special guest, Maria Bamford.  Marostica nailed it, they hit it out of the park, mainly BECAUSE they didn’t make their set about their experience, but about things we could all relate to as humans.

Then came Sophie.  Her set featured a cute-looking, soft spoken, girl who gently laced the audience with crass expletives and stories that were ladened with sexual experiences.  It was the perfect juxtapositions of these two ideas and the amazing timing of her delivery that had us convinced that the grand prize winner was anybody’s guess.

The Winner Is Announced… 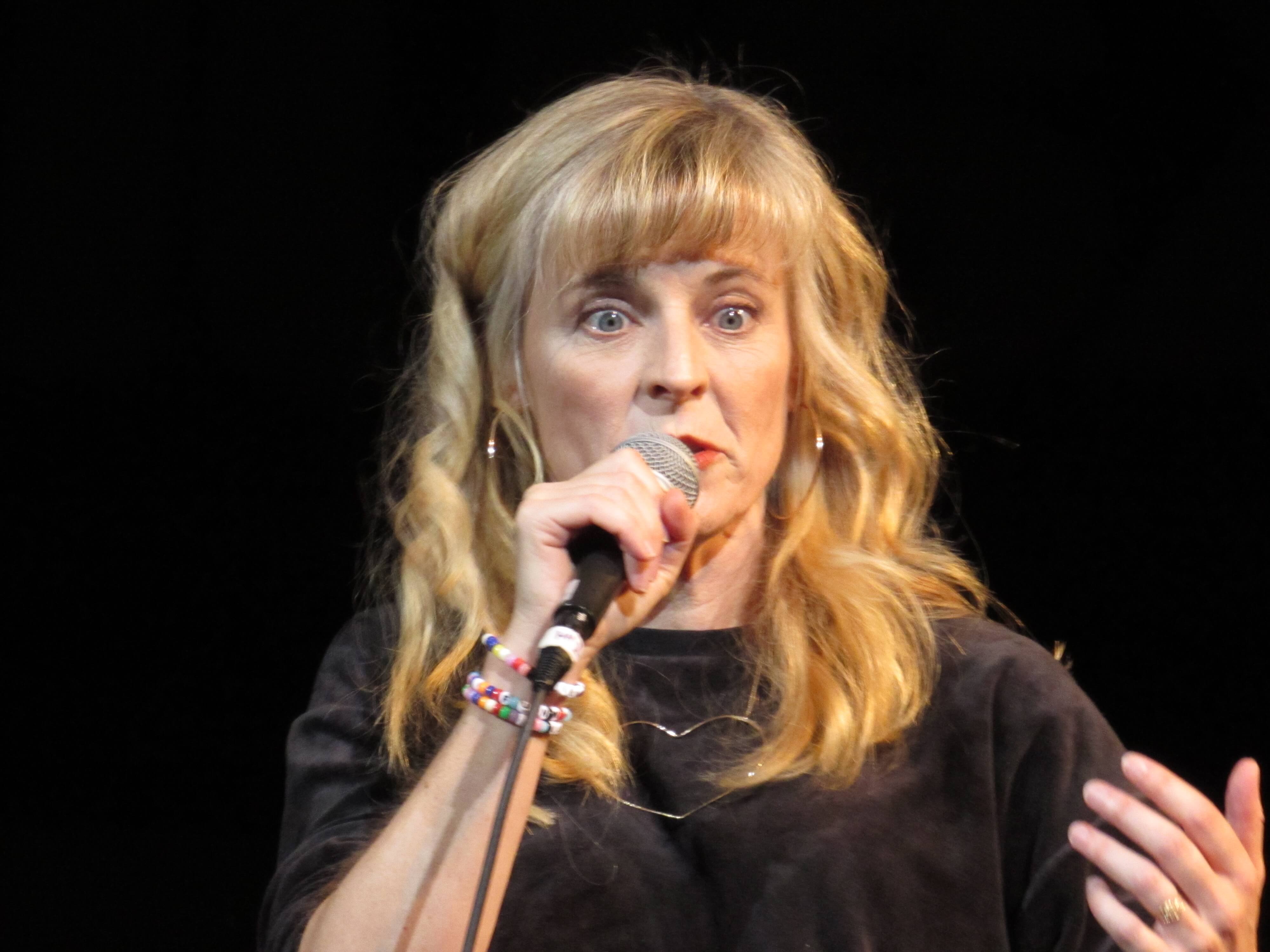 The audience voted, and while we waited for the results, Maria Bamford, took the stage to grace us with 15 glorious Bamford-esque minutes.  She was all over the stage… seemingly going off topic on tangents, but then ending each one with a pre-designed punchline.  That’s when you realize that she’s not as crazy as she pretends to be on stage, and that you might be the crazy one.  It’s her world, and when she’s on stage, we’re just visiting.  She was a juggernaut of comedy, that left the crowd as baffled as they were roaring in laughter. 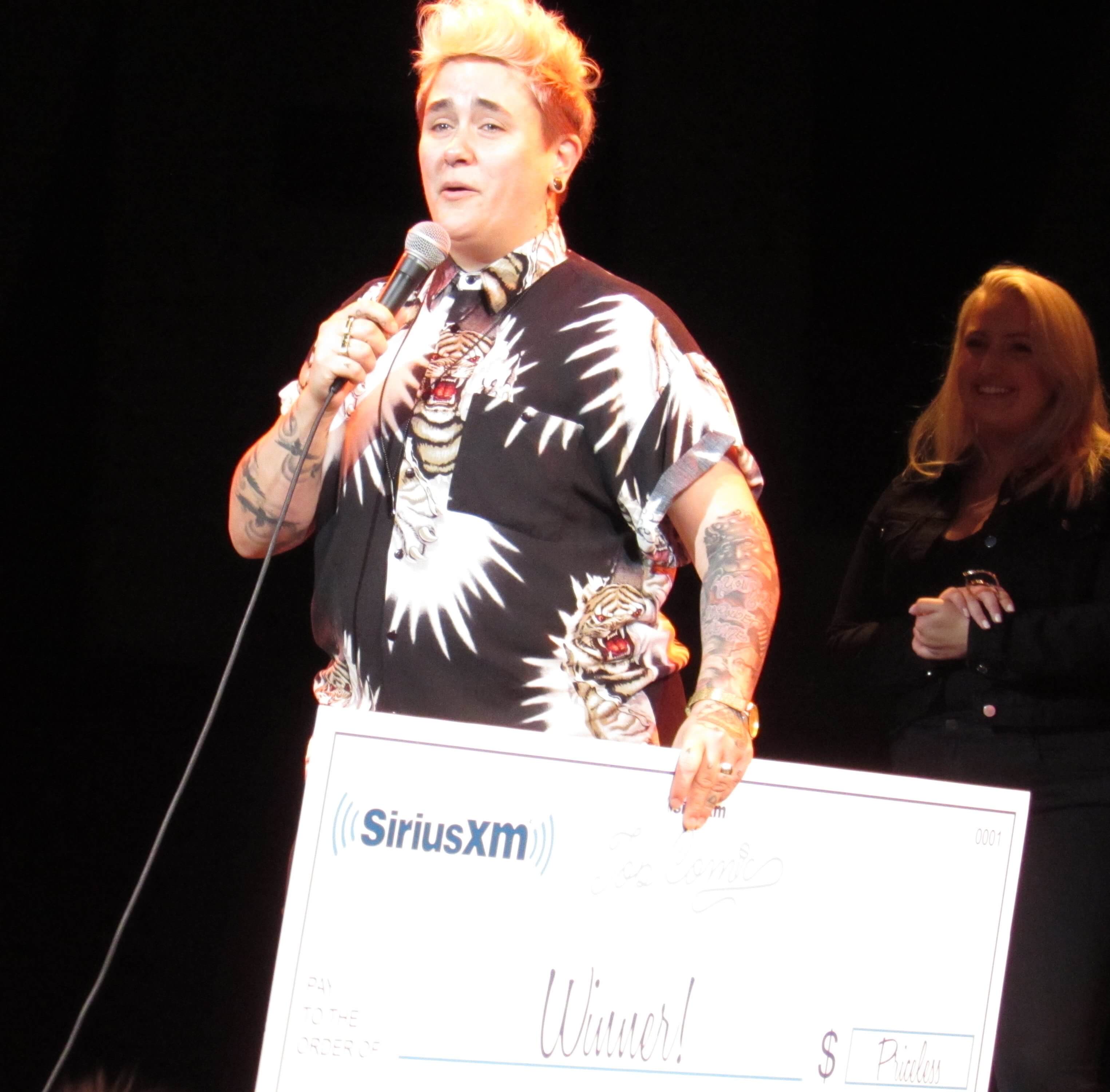 And that, children, is the story of the SiriusXM Top Comic Double Rainbow win, as Chanty bust through the doors of comedy as a trans man.  Seriously, this was well-deserved.  Although Buddle and Reynoldson were absolutely amazing, there was something more complete, more structured about Marostica’s set.  Something about it made me see them handling themselves on any stage for any crowd in any country, and putting smiles on the faces of proponents as well as the biggest bigots and enemies of the LGBTQ community by showing us that we are all human, and who we go to bed with, or which genitalia we are assigned is only a part of who we are and has nothing to do with the gift that we are trying to give this world.

Congratulations, Chanty Marostica, you are our hero.

Amendment:  Originally, this article was written with certain terms that were not sensitive to the trans community.  We apologize for that.  We have taken steps to ensure that those faux pas are not repeated in future posts.  Awareness is key to acceptance and change.  This event, in itself, has made this content creator more aware and for that we are grateful.  Again, apologies to anyone we have offended.