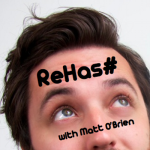 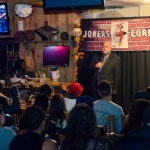 It has been a few weeks since the JFL42 festival concluded. But we haven’t forgotten to tell you about it. Boss De Bortoli and I were out indulging ourselves on the comedy talent that flooded the city of Toronto for a just over a week. I didn’t get out to see as many shows as I normally would have but Boss De Bortoli made up the difference for me.

I chose one of the last shows of the festival. The Best of Absolute Comedy  which featured some comics that I’ve seen and others I  was happy to discover.

And your host MC– Andrew Evans. Fantastic performance. You know the late show always has its curve balls and he handled them with care and laughs. The show was packed and the crowd was eager to laugh.

The one who stole the show for me was Nick Reynoldson. I have seen him perform before but not like this. You can tell that the week of JFL performances had taken its toll, but like the pro he is, he came and destroyed it. Making fun of his looks and race, which quite frankly, he’s right, he could be mixed with anything. His shy demeanor may sway you to think that his delivery will be the same. *shaking head in no signal* He’s explosive in a nonchalant kind of way.  I had a great laugh!

Next my girl Keesha Brownie took the stage. She is a comedian that you should watch out for. She is talented, relatable and for all you white-black girls out there, Keesha knows child, Keesha knows! She uses her Jamaican background in the right places that make her material unique and comical.

Arthur Simeon closed the show. I hadn’t seen him in over 2 years. Not only has he gotten sharper but more comfortable, confident and sure of himself and his comedy.  I can’t wait to see what the future holds for him.

After the show, I headed down to Comedy Bar to try and make up for a lost week of mingling and dancing with my funny people. As expected on the last day, the place was packed full of tired but happy comedians having had a great run.

One thing about JFL, is they know how to have a great time. We danced into the wee hours of the night with comics, producers even the man himself, Robbie Praw was letting loose after a successful festival. It was a fun night and it reminded me why I love doing this thing called blogging.

Bravo JFL42! Once again you made thousands laugh and replenished our souls until next year.

If you can’t wait  that long, check out hahaha.com for upcoming shows and tours. There’s always something funny going on.