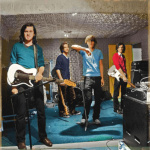 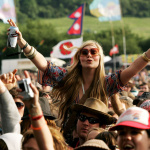 Friendly Fires are going South with their sound and hopefully a summer tour!

Friendly Fires have been around the indie block for sometime now, breaking onto the scene in 2006. Since then they’ve become known for their dance tracks which borrow from a slew of musical genres. If you recall Issue 9 of CHEEKmagazine.com then you will remember our music editor Krista Elkin describing the band’s sound as “bits of English punk and ska, Manchester Shoegaze, Japanese noise-rock, and Detroit and Chicago house, among other things, and making solid dancefloor tunes.” And the boys of Friendly Fires agree.

Maybe they’re out to conquer every genre OR maybe they’ve been inspired by the London School of Samba who recently toured with them, hint, it’s the second one, but Friendly Fires have revealed that their new single will be of Brazilian-flavor.

“Kiss of Life” will be unveiled exclusively at the Glastonbury Festival tomorrow, June 26th, and then released this August. From there the group is anticipating a little junket through South America. Frontman Ed Macfarlane told NME.com, “Fingers crossed we’re going to be doing Rio, Sao Paolo, Brasilia, Santiago and maybe somewhere else in Chile.”

Friendly Fires perform "Jump in the Pool" with some feathered dancers Image from: http://www.nme.com/news/friendly-fires/45570

If you absolutely just can not wait until August, tune into Radio 1’s Essential Mix www.bbc.co.uk/radio1 where the band will host a 2 hour DJ mix this Friday, June 26th from 3 a.m. to 5 a.m.

Friendly Fires is determined to keep us on the dancefloor, and once this single is released, just try to drag my Samba shakin’ ass off of it.

Metric and Phoenix: All Systems Go