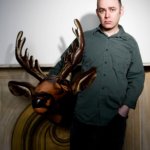 Modern Sons and “The Weird Years”

In the four years since the release of “Moon Raccoon,” Bozeman, Montana, rock band Modern Sons have not been treading water. An experimental EP release, lineup turmoil and simply being human in the modern age left room for a new evolution.

The album includes unfinished gems from bassist Dustin Crowson, drawing from spotty recordings off his archives – a series of old phones that could serve as bricks.

“They have a home now,” Crowson said. “It’s nice, the home they deserve.”

Saul, who has long been one of the main writers for the band, contributed the bones of about four songs for the band to flesh out in rehearsal. He also composes Modern Sons’ lyrics, sometimes mining them from old songs that didn’t make the cut.

Guitarist Dan Haywood also shows his songwriting chops, bringing an almost complete version of “Cat in a Cage” to his bandmates to add his spin on “The Weird Years.”

As the band evolves, the balance has shifted. No longer toeing the line of the overdramatic with the agony of lost loves, Modern Sons’ songwriting has a more positive bent under the instrumental fuzz.

“You can’t have two albums about the same girl, unless it’s your mom,” Haywood said.

The band dives in with lead single “Art Party!” Above the band’s hard-charging guitars, the track evokes a party atmosphere with chaotic shouts and laughter.

The instrumentation may seem more simple than past iterations of the Modern Sons sound on first listen, but it is boosted with a focus on dynamics, on a sound that moves beyond the constant build of atmospheric post rock and incorporates different influences from decades of rock music. They like to call it psychedelic post-punk. It’s weird, after all.

Haywood has been given more room to play with riffs on lead guitar. He arrived to record the album with five guitars and 50 pedals, plus two synthesizers with another 15 or so pedals. Saul, for his part, has learned to embrace chords and lends to the layered texture with bass riffs transposed for guitar on tracks such as “Eighteen Hours Later,” “Caterpillar Blood” and “Meow Neon.”

“The Weird Years” is also an album born from a beloved dive bar in Bozeman. Characters who tread the Haufbrau’s peanut-shell-covered floors inhabit the album’s 11 tracks, taking tracks like “Awkward Hugs” from an instrumental to a tale of the promise of new romance over cigarettes and late-night gigs.

“The Hauf is like the godfather of this band,” said drummer Ezra Bowman.

Local influence is felt in the recording process as well. Keith Martinez and the late Ben Spangler of The Touchers once lived in the house where the album was recorded. Drums and bass were tracked in Martinez’ old room.

“They were the most legendary, influential band to ever come out of Bozeman,” Haywood said.

With “The Weird Years,” Modern Sons hopes to build on their own legend.

“The Weird Years” album pre-sale has begun. Order a physical copy on Bandcamp and you’ll receive the digital download of the album when it is released on Oct. 3, plus an immediate download of “Art Party!” The digital version will also be available on Apple Music.

With The Love Darts, Sundance and the Wilds and When Particles Collide

With Easy There Tiger, Novacane, and Onion the Man

With Novacane, Dream Wulf and Spiller

JFL42 Interview: Toronto, Todd Barry Is In You

Treating Yourself Joins Forces With CCBE Expo for Cannabis Patients in Toronto Nov. 22-24, 2019