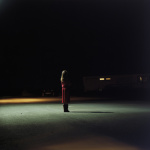 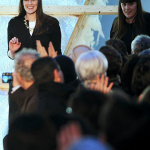 We’ve been waiting in anticipation, on the edge of our seats, and frankly, we’re getting a little sore.

Rumors circulated the fashion scene in late January surrounding the late night attendance of Delphine Arnault, daughter of Bernard Arnault and the second largest shareholder (next to her father) of LVMH, at Gareth Pugh’s first menswear collection.

Pugh’s collection spawned glorifying reviews as he closed Paris Men’s Fashion Week with duds reminiscent of creepy characters from the late 80’s flicks such as Predator and Edward Scissorhands. His gloomy London childhood has possessed his skill to create commanding garments and all the right people are noticing.

Kris Van Assche’s feet have proven to be a bit small to fill the shoes of Hedi Slimane but are Pugh’s the right fit to head up Dior Homme? With only one menswear collection under his belt he has already proven his force in the fashion scene and may just be the dynamo menswear needs to bring Dior Homme back to life.

So Ms. Arnault, it’s in your hands, and we’ll try to be patient, in the meantime, maybe we’ll get a better chair.

The Photography Dictionary: for all your emotional inquiries