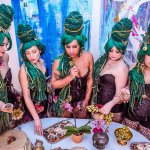 Admittedly, I am a Justin Timberlake fan.  This is relevant information before we continue here.  I was a casual fan in his N*sync days, but a hardcore stan from the moment I heard his transition single “Gone” supposedly by the group although none of them are on the track.  I have seen his “FutureSex/LoveSounds” show as well as his “Legends of the Summer” concert he did with Jay-Z.  I watched his Jonathan Demme directed “Justin Timberlake & The Tennessee Kids” Live concert film at TIFF and wrote a review on it in 2016.  So my expectations… and anticipation was high.

JT, and a lot of musicians these days, rely heavily on ticket sales to generate revenue as the music industry has become an epic dumpster fire over the last decade or so.  Tricky thing some of them do is that they drop a single, maybe two, then announce concert dates, and schedule the on-sale dates BEFORE the full album of new material drops.  Sneaky.

“Man Of The Woods” is Justin’s first new album in 4 years, and in this new world of listener ADHD, that might as well have been a lifetime.  The lead-off single, “Filthy” brings us a reintroduction to our old friend, Justin, who kicks off the refreshing new electro-bass track with the warning, “Haters gon’ say it’s fake…. …. so real.”  Slick swag that we are used to from the boy wonder.  A week later he drops “Supplies“, this is where things go a little south, like very south, like hillbilly south.  I can’t really describe this track as anything but white trash alt-Trap music (but Trap music IS alt-HipHop), so… it’s confusing off the top, now add that this song and it’s ridiculous lyrics and hook are being sung by one of the biggest stars in the world, and an alarm about the quality of this album goes off.  The following week:  tickets go on sale.  The price point is high.  $95 for the nosebleeds to more than $280 something (plus service fees) for floor and lower bowl.

Now because no one has heard the album, it’s a gamble… and a big one, because if it’s amazing and you don’t have tickets, you won’t be able to get them.  If the album is horrible, and you just dropped $300 plus on a ticket, you may feel like a chump.  Decisions, decisions.

So, Man of The Woods dropped after I dropped an amount of money I’d rather not discuss… ever…. again.  The album was greeted with lacklustre reviews from a confused staple built-in audience that Justin effectively alienated with his outdoor man art project.  Gone were the danceable bangers like “Rock Your Body”, “Like I Love You”, “Summer Love”, “Love Stoned”.  Instead we get a strong concept album peppered with a few shining moments, but mostly with mediocre, basic production from the masters who brought us his CLASSIC solo debut, “Justified”; and because of the minimal production we have to now face the fact, that lyrically Justin, and his compadre’s abilities, are somewhat limited.  Honestly, before, the music, singing, harmonies, melodies and rhythms were so good, that no one cared about the quality of the lyrics.  This album exposes that fact throughout (see “Supplies” if you don’t believe me).

ANYWAY, so the excitement and anticipation of this show was minimal, especially since I heard that neither of the two Toronto shows (which were the first and second stops for the Man Of The Woods tour) sold out.  I heard no reviews about the quality of the first show, my ticket was for the second show.  But I did read an article that quoted someone who went to the first show stating that it was half-attended.  In the same article, it was revealed that a couple days before the 2nd show, Ticketmaster quietly dropped remaining ticket prices by almost 50%, and offered people who paid the higher prices a closer seat if they contact them before the day of the show.  Needless-to-say, things were not look gooding for Mr. Timberlake and the opening stops of his MOTW campaign.  Still, I tried to be optimistic, because you never know if what you’re reading is an accurate accounting or something with a tinge of some media hate.

I was expecting a good show but more of a slight variation of his other shows and not much of the new album, based on the album reviews that seem to be one of the first times I’ve heard a practical consensus on the album quality no matter who I asked.  Here was the surprise though, where it could be argued that Justin may have phoned in the album, he took that energy and creativity and repurposed it into this live show.  If you ignore the fact that the concert swag was ugly (and the cheapest t-shirt was $55!!!) and the fact that he actually performed “Supplies” and didn’t perform his first ever solo hit, “Like I Love You”, you would see some truly impressive things.

The stage design was unlike one I’ve ever seen before.  The mainstage was at one end of the arena.  The floor of the arena had a long almost “S” shape runway that ran the entire length of the basketball court from one end of the arena to the other with a mini stage in the middle, and a slightly bigger one at the far end.  The inner curves of the S are filled with fans who paid over $500 a ticket.  There are faux trees alongside the edges of the runway.  Vertical screens that would project video images of what was happening on stage as well as mood-setting motifs like forests and fireflies, and a sky full of stars was projected over these screens that were raised and lowered whenever needed.  An atmosphere of being with Justin in the back woods of Tennessee is instantly created and permeates throughout.  Without giving too much away, there was even a setting that made you wish you brought some marshmallows to roast.

Justin touched on (almost) all of the hits, and he, almost defiantly, performed about 8 songs or 50% of the critically panned Man Of The Woods album.  Nobody I know likes “Supplies” but he had that alcohol affected VIP floor of mostly white patrons screaming the annoying hook with him, so… maybe I’m missing something.  I just took a second to listen to it again.   Nope, I’m not missing anything.

Overall, the moves were there.  The vocals were there.  The talent of Justin Timberlake is never ending.  People should go to this concert whether they love him and everything he does, or they love him but still reserve the right to be critical of his artistic choices.  The 2nd show was sold out.  Is it because of the part noble/part desperate response of Ticketmaster, or because of word of mouth of how good the first night actually was?  Guess we’ll never know.  It’s one thing to bet against the quality of the material, artists make missteps all the time.  However, betting against the man himself… is a mistake.  Justin was smart, he put his redemption in his show and the presentation of the new material itself.  In terms of this concert, he was right:  “Haters gon say it’s fake…. … so real.”

Hit up Ticketmaster.com to get your tickets in your city.  Justin will be back to do a 3rd show in Toronto on Oct. 9, 2018.