Kicking off #JFL42 the right way And we’re off! JFL42 is in full swing!  With acts like Janeane Garofolo, Sarah Silverman, Ivan Decker, Colin Quinn, Anthony Jeselnik and so much more, deciding who to see can be a challenge. I had my fears going in this time with a pass and barcode but all went well. Very smooth. What’s even better is that you can buy tickets at the door this year. So if you don’t want to splurge for a pass, you can always just be traditional and walk up to see a show.

I like to catch new comics, ones I have never seen before. So Graham Chittenden was numero uno on ze list. The show took place in the intimate venue of  the Drake Hotel. Now between Home Depot, “Fuck this House” , pet hair and being 65, he hit all the things that one can and will relate to at one point in your life. My dad is a handy man. I remember the tears, mommy yelling and taking whores bath in the sink because the shower is broken.  I myself am a Red Green connoisseur so breaking new things and repairing them with duck tape is a usual repair day in my home. What I’m trying to say is that I get you Graham. If  your show called “Fuck this House” ever comes to the TV, I would watch that every week and tweet you while the show was on. #4months #fail.
Oh and being old, or 65, is what I want to be to. I can’t wait to be an old, grumpy shut in who only goes out once a month to annoy the world and everyone and everything around me. It will be glorious! Unfortunately, I didn’t get to see his opening act as I am addicted to cigarettes. If you’re out there buddy, please comment your name. You can catch Graham Chittenden September 21st, 23rd and 24th at the Drake Hotel 9pm. Next, I hopped into a cab and zipped down to the Rivoli to catch my buddy Ben Roy and his show “Go Through the F$#cking Window”. I totally missed the hilarious Dave Merheje who opened for Ben. Once again, my other addiction for food made me late. Dave, I apologize but from what I heard, you kicked it off like a pro. Since I discovered Ben at the Nasty Show during the 2012 Just For Laughs Festival, I’ve been a total fan. His writing is so well thought out and his delivery is right up close and personal and bang on, he just brings you into his world and you can’t help to follow. His views on family like letting your kids be themselves and not trying to “put a square in a circle” or being OK with the fact that you hate you mother or that your dad is an asshole… the fact that you have blood in common doesn’t mean you are obliged to love and care for them especially is they are dicks and assholes. In your face cousin Peter!

It’s time to wake up and smell the coffee folks! He’s real and witty and always entertaining to watch. I’m definitely going to go see him again before the end of the festival because he guarantees laughs. You must go see this amazing comic while he’s in town. You won’t regret it a bit. Catch him September 21st, at the Rivoli 11pm, September 22nd-23rd 7pm at the Garrison.

If you don’t have a pass, you can buy tickets at the door for 20$. JFL42 is going on until September 28th, plenty of time to get a giggle or two. So just do it. Get out this weekend and relieve your work week stress with some laughter and good times.

I’ll see you around the curb, 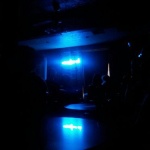 It just got Sirius!

Ben Who? #JFL42 Late Show at the Rivoli Last Night 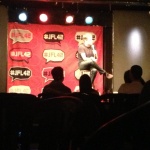