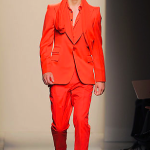 If it’s too loud, you’re too old. No offence, but the title of this new rock doc says it all, “It Might Get Loud.”

Directed and Produced by David Guggenheim, this documentary follows three of rock’s devout sons as they talk music, craft and guitars.

The concept of the film plays to the hearts of guitar nuts all over the world borrowing three guitar legends from three different musical generations and setting them up for and epic jam session.

The legends are none other than front man of The White Stripes Jack White, U2’s The Edge and Led Zeppelin’s Jimmy Paige. You can imagine the road stories these guys must have; similar to Almost Famous times a million. However, this film is different.

Premiering at the Toronto International Film Festival in September 2008, the film received great but unexpected reviews.  The film is less about the rock scene and the rock stars and more about the actual music. “It Might Get Loud” is an honest tribute to the instrument that these men have used to make musical history. “The film is, in essence, a love letter to the electric guitar,” twitchfilm.net reported after seeing the film.